I haven’t had potatoes au gratin for years, and I’m happy DH requested it for Christmas dinner, and that I found a dairy-free version online to riff on. This was fantastic, and my guests had no idea it was dairy-free until I told them.

You can’t taste the coconut at all. 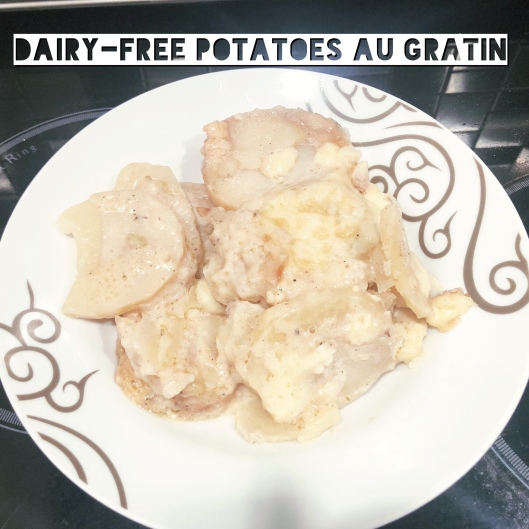 Grease your pan if you’re not using a disposable – you want something rectangular.

In a large pan, sautée the shallot and garlic in the oil until softened and starting to brown.

Boil 10 mins. While that’s working, slice the potatoes and add to another large bowl – covering with cold water so the potatoes don’t brown.

To the coconut mixture, add a slurry of the chicken broth & cornstarch. Stir vigorously to thicken the sauce.

To assemble, make a slightly overlapping layer of the potatoes, top with sauce and cheese and repeat until you run out of potatoes. You want the top layer to be potatoes followed by a generous layer of cheese.

Cover with foil and bake 60-75 minutes or until a knife inserted in the middle meets no resistance.

Remove the foil and bake 5-10 minutes or until the cheese browns. If your oven has a broil function, more the better.