This recipe is based on a show-stopper in a cookbook from one of my absolute favorite chefs in Miami.

This version incorporates chicken thighs and stovetop cooking – I don’t currently own a pan that can go in the oven; and the whole chickens looked kinda sketch at the store the day I shopped for this meal, so modifications it was!

If you can, check out Michael’s Genuine Food: Down-To-Earth Cooking for People Who Love To Eat by Chef Michael Schwartz. Where he excels, and what makes his Miami restaurant(s) so successful, is taking a few good ingredients, treating them with love and not much else, and turning them into something that sounds dead-easy but tastes special.

Michael’s Genuine (and later the pizza restaurant Harry’s) were two of our favorite go-tos while living in Miami and places we could visit often, get something we would never order (like chicken that sounds kinda boring on paper), and have it be an experience we talked about for weeks after.

This recipe takes the spirit and the general flavors of one of our ‘company is coming’ go-tos from that cookbook, and makes the technique more approachable for where we are currently and the tools we have to work with.

Note: What’s up with raisin oil? It’s delicious! This dish was the first we’d encountered it, and while it is definitely a delicate taste – it adds a little somethin’ to this dish that helps it stand out. Want more? This recipe from the NYT also helped when coming up with this (super-simplified) dish. 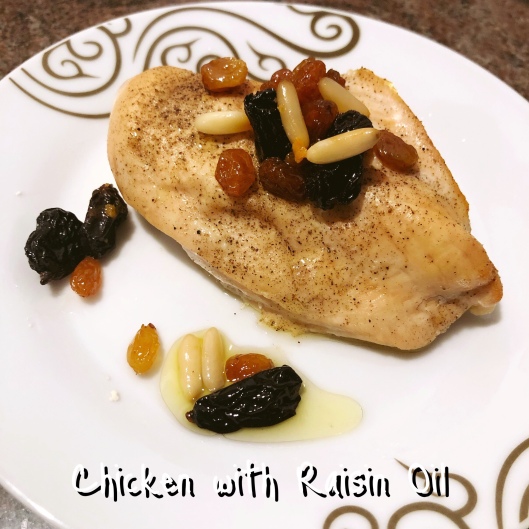 First, make the raisin oil by simmering the raisins and rosemary with a Tablespoon of water in the 1/2 cup olive oil about :30 or until the raisins have plumped.

I left my heat up long enough to fry the rosemary leaves a bit for an added garnish.

For the chicken, heat your largest skillet over medium-high. Add 3 Tbsp. oil. Pat the chicken dry with paper towels and arrange in a single layer in the pan skin side down. Salt & pepper liberally and sear until golden.

Flip, salt & pepper, and brown the other side.

Add the thyme sprigs and a few good glugs wine (dry white would be best but I only had some aging White Zinfandel). Cover, knock the heat back to low, and cook 15-20 minutes or until cooked through.

Make sure to check your chicken at the halfway point, baste, and make sure anything isn’t drying out. If it is, add a little extra wine or water.

If you’re inclined, this would be a great time to make a pan sauce with the raisin oil and/or a thickener. Despite the instructions being really clear on how to accomplish this feat in the cookbook, at this point in the evening while already branching out on my own with the cooking method (and having a glass or two of adult beverage under my belt), I didn’t want to mess with it.

So I served mine with a little raisin oil drizzled over top and it was delicious. I’ve made the pan sauce in the past and it was also delicious.

I have also found over the years that I like a hand full of fresh parsley over top (not pictured), and some times I hit the dish with a little lemon juice at the end of cooking for a bright little punch if I’m feeling saucy.